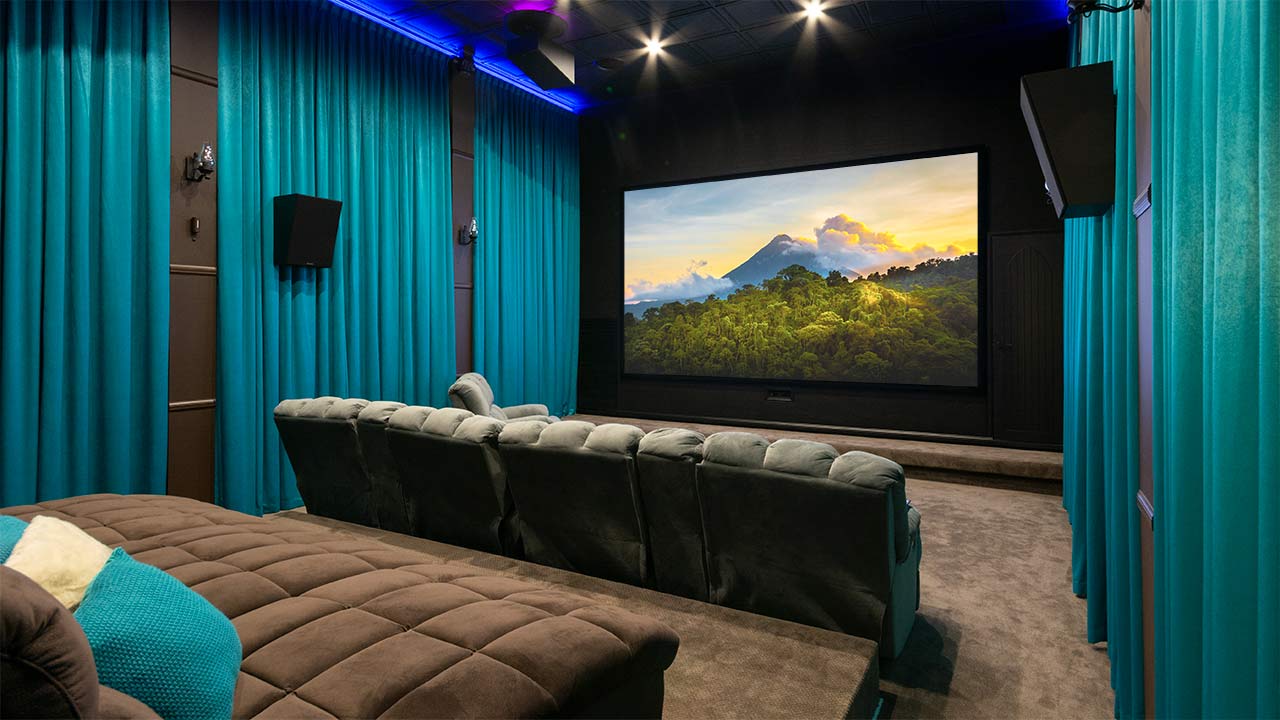 11 May The Church of Sound

Posted at 15:38h in Sound Advice - Tech Articles for Enthusiasts by KsoundX
Share

When it comes to do-it-yourself home cinema renovations, there’s few that can match the scale and wonder of this Series X home cinema, converted from a 19th century church into a high tech movie and gaming paradise.

Built in 1896, the bluestone church was used for over 110 years until the church and accompanying land were put up for sale. With future plans to convert the church into a home cinema, Matt and his wife Kate purchased the land and lived in the church for two years while their house was built on the adjoining block. Rolling forward to 2014 and with the family house completed, Matt then turned his attention towards his ultimate goal – a home cinema fit for the gods. 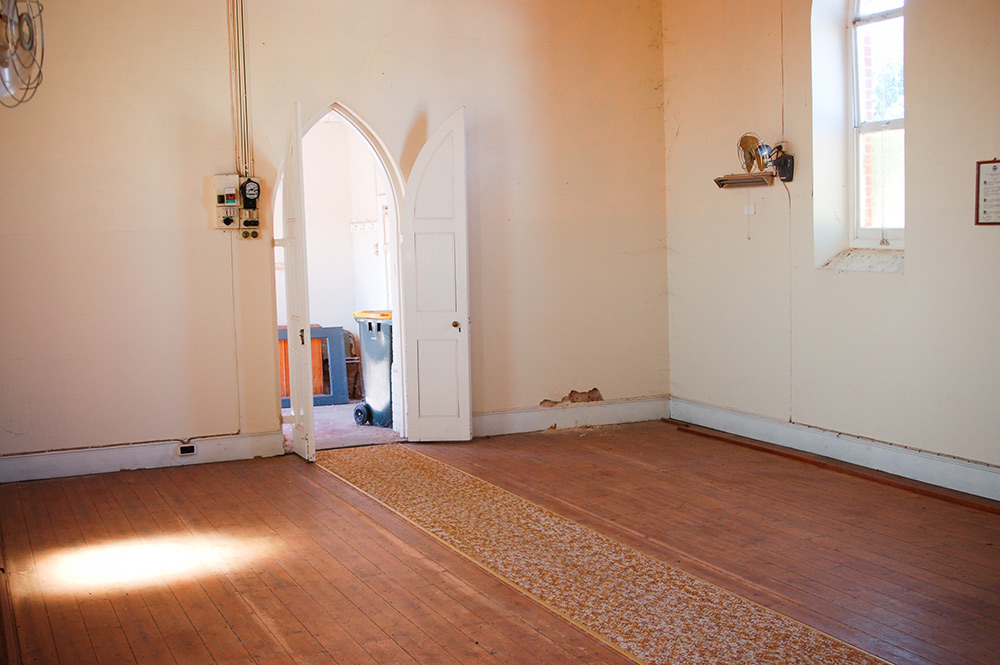 The very start – a bare-bones view of the church interior. 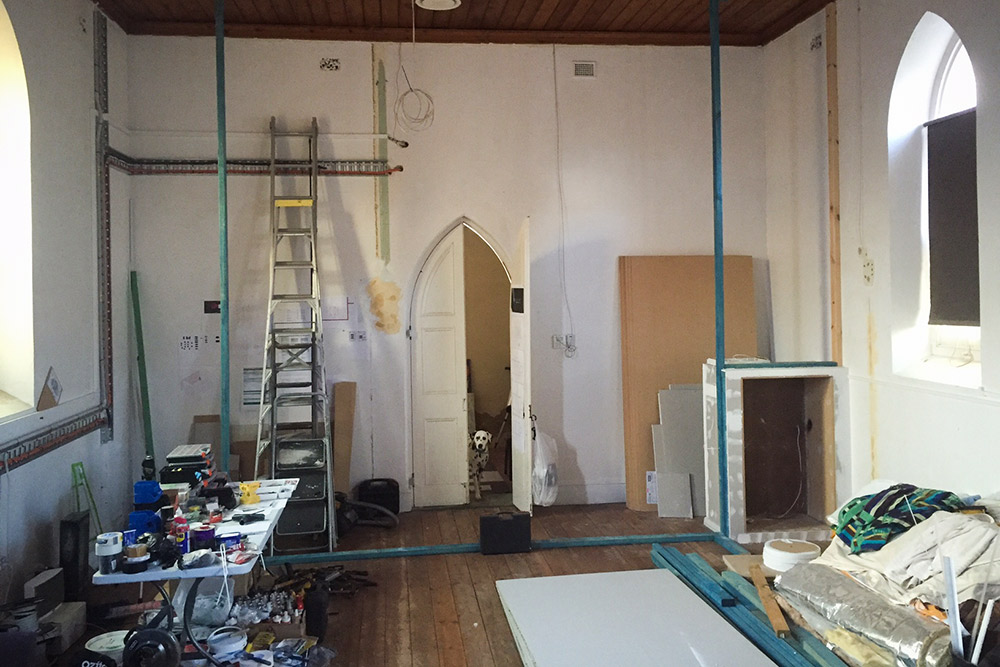 ‘Minty’, the family dalmatian checking in on progress. 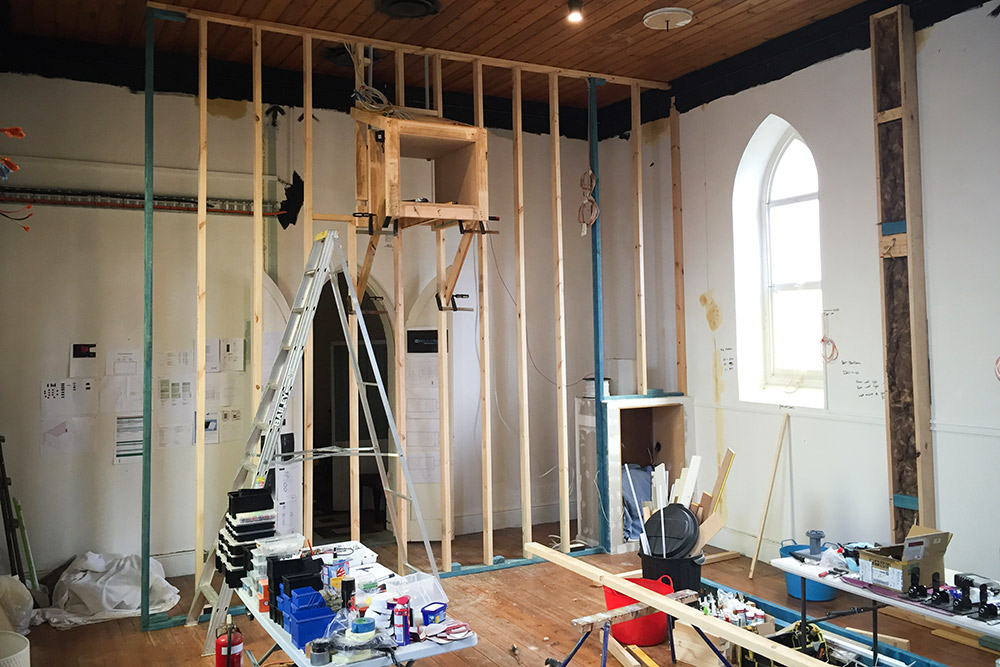 Construction beginning on the back wall with projector housing.

So what did Matt set out to achieve for the ultimate home cinema room? Being a huge movie buff, Matt wanted an enormous picture and immersive cinema sound for a one-of-a-kind experience. This experience would also go a long way into realising the second, equally important criteria – to function as a gaming system for this Xbox family to play into the early hours of the morning.

Aside from the audio-visual requirements, the church needed to have areas to display Matt’s movie and game memorabilia, store countless UHD / blu-ray discs, as well as an area to store the processors, amplifiers and electronics that would drive the system. The room control needed to be hassle free and easy to use, from switching the air conditioning on, to adjusting lighting and ultimately controlling what was being played in the cinema. It also needed to be comfortable… warm, inviting and accessible.

Front false wall construction, with space for speakers and equipment racks behind the screen. 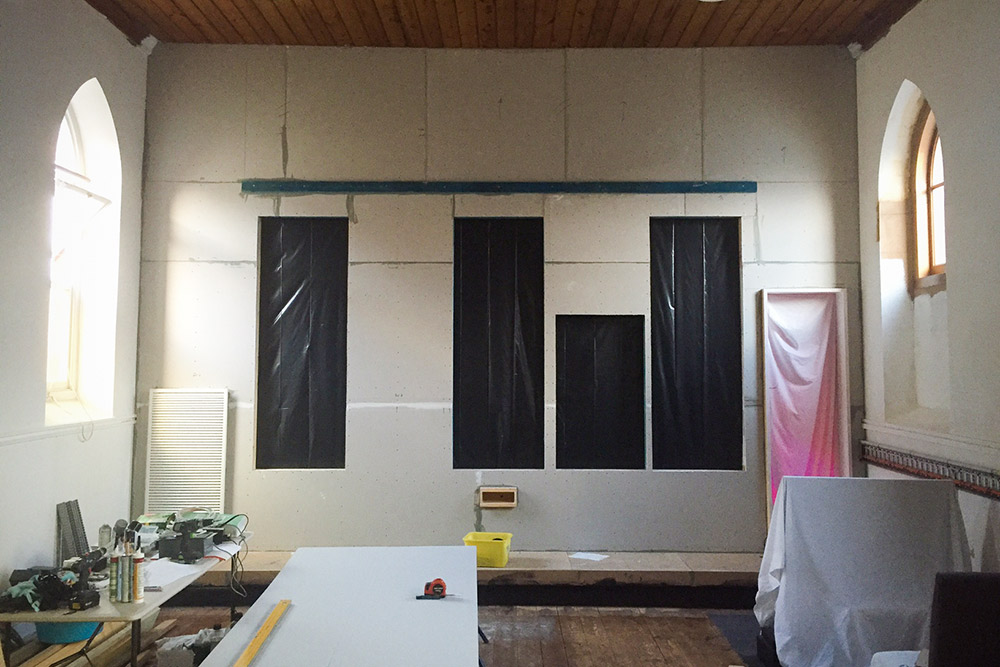 The false wall was constructed using 90x45mm studwork, glued, screwed and covered with one layer of 16mm MDF, two layers of 13mm plasterboard, then covered with acoustic material. 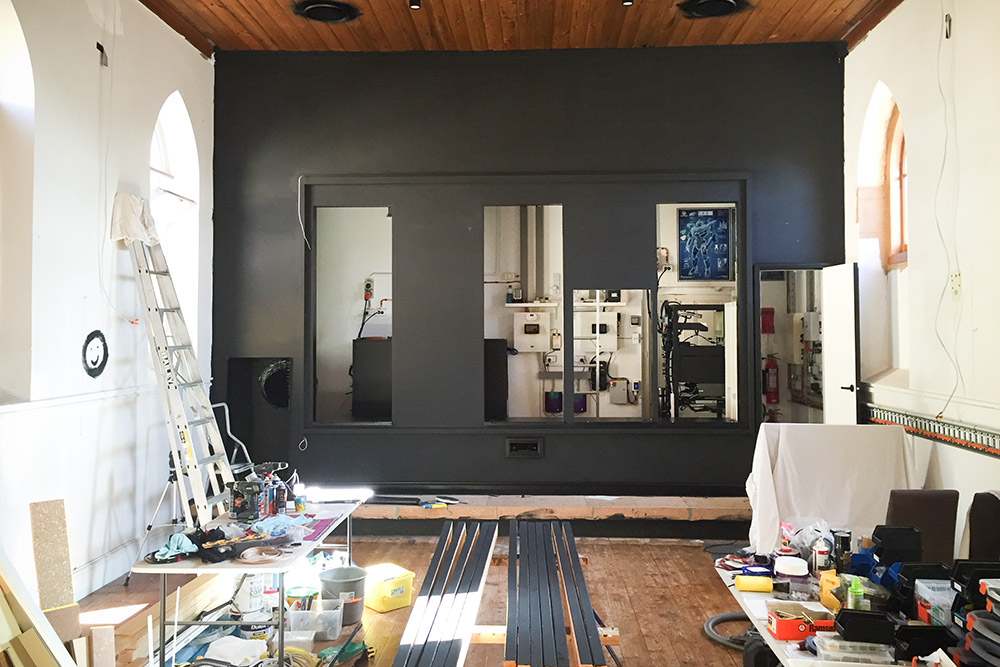 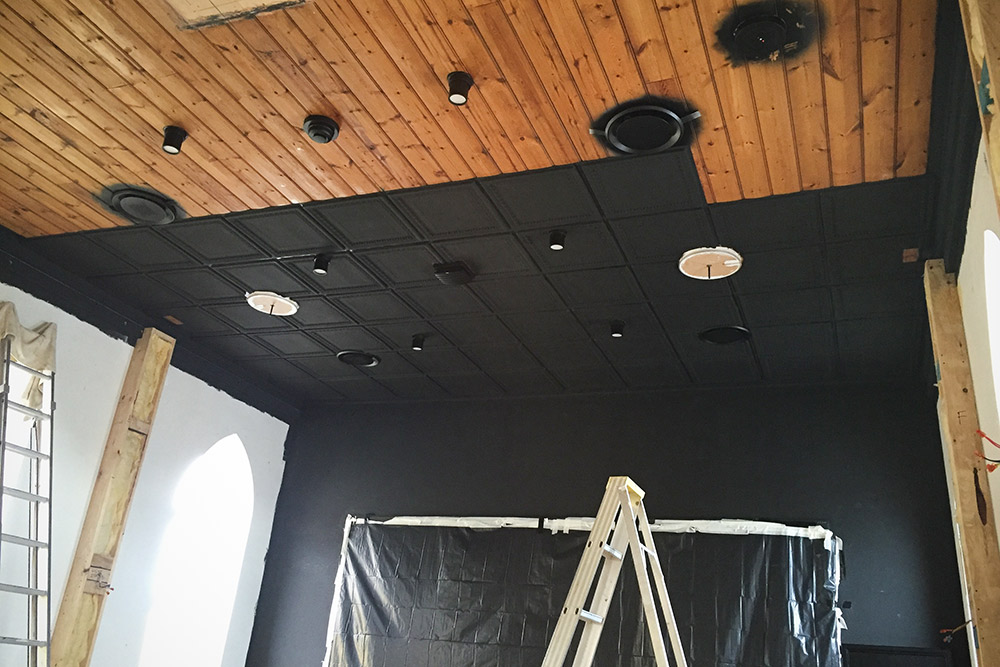 Matte black pressed tin panels tie the ceiling in with the rest of the room.

The Krix Cinematix, a three way, dual 15” screen loudspeaker, would form the foundation of the sound system, but was surprisingly also the basis for many choices in the room. In our conversation with Matt, he mentioned:

“The cinema was fundamentally based around the Krix Cinematix speaker – everything from the depth and size of the data centre room, screen size and location, seat location, amplifier size, cable sizing, even the electrical load on the room. They really were the pivotal decision to bring the room together and man do they kick ass.” 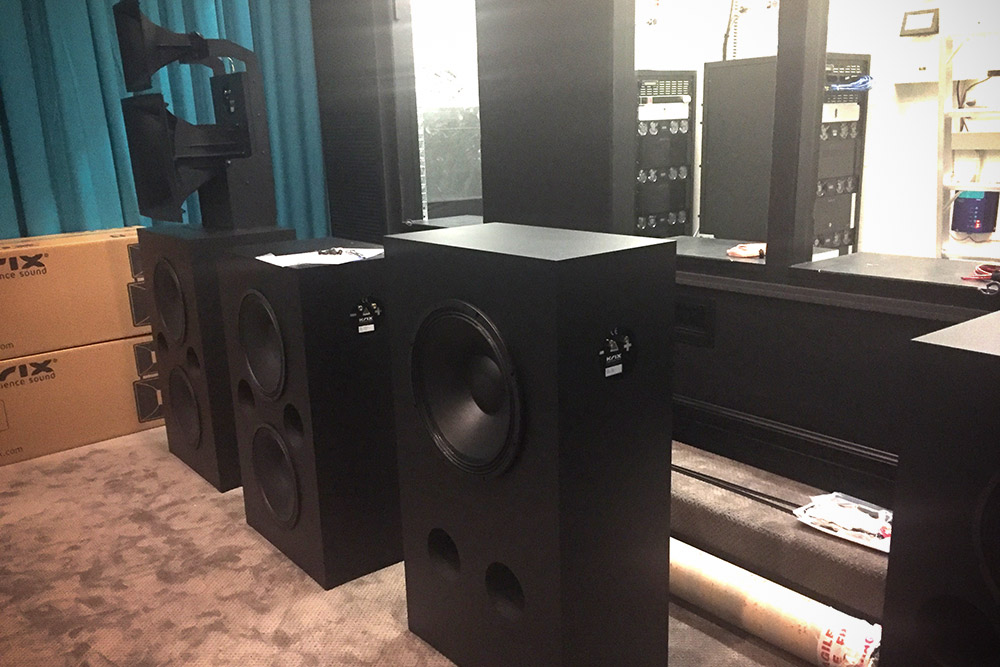 Unboxing the Series X Cinematix and Cyclonix for installation into the front baffle wall. 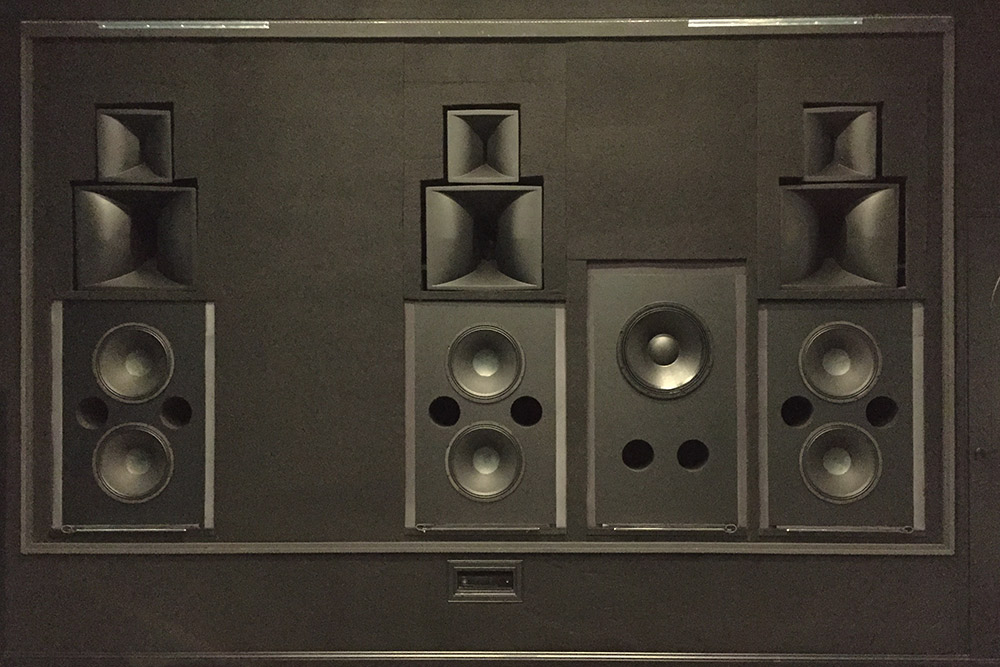 The finished baffle wall. Scott Krix introduced the concept to cinemas in the early 1980’s and it is still used by cinemas worldwide today.

After experiencing the system in person… there’s no denying that fact. Sometimes, after hearing many speakers in smaller environments, it can be easy to forget just how much presence these beasts have in even the largest of rooms and auditoriums. Pairing the Cinematix with dual Cyclonix (front and rear) and ten Megaphonix surrounds, Matt was able to create a 7.2.4 immersive sound system capable of delivering crazy amounts of sound from every direction. There’s much to be said about having a larger dedicated space to deliver that true cinema sound. 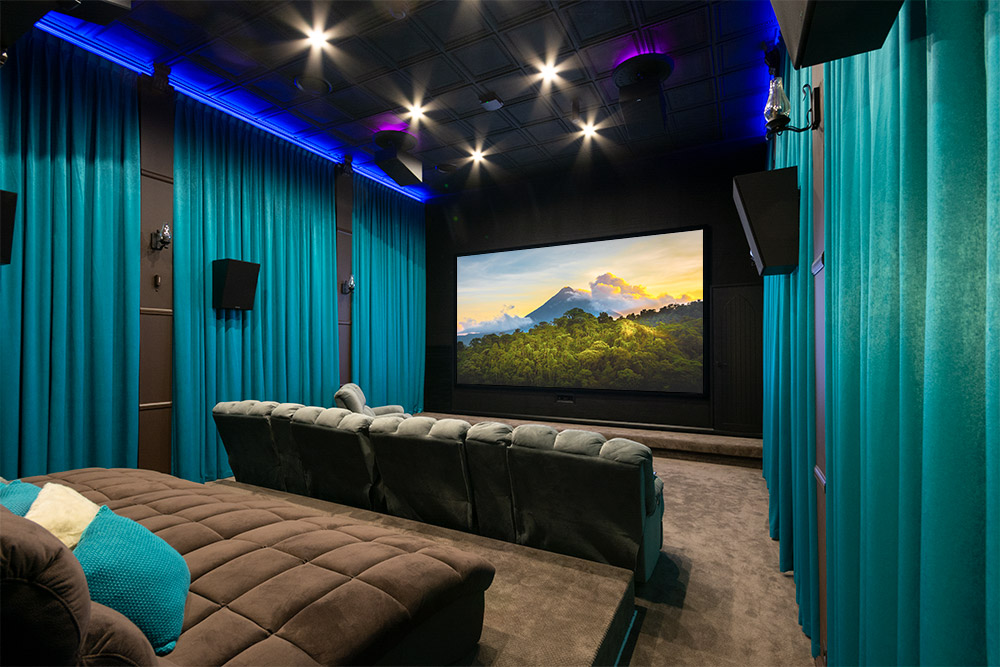 The finished room, looking from the back of the cinema. 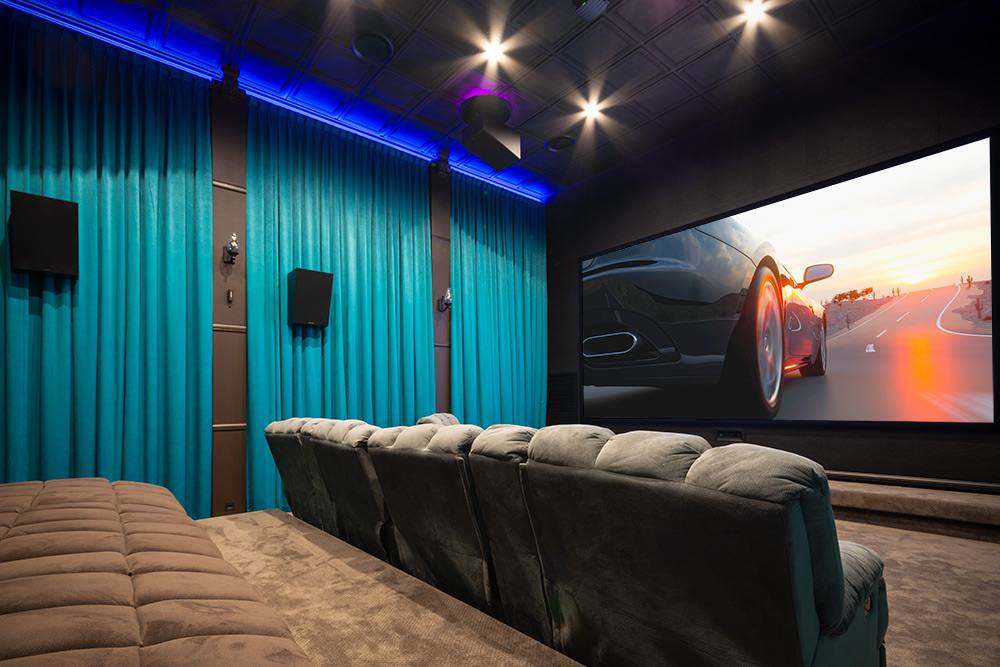 Gaming played a large part in the design of the cinema.

During the build, Matt needed to ensure all cabling was run exactly where it needed to be. As many know, it’s a painstaking process to start cabling in a finished room, let alone a room of this size. To that end, 100 metres of cable tray and 3 kilometres of cabling were installed to service power, speaker, subwoofer, lighting, fibre optic and lighting requirements.

Sensing just how much work the cabling alone took, we asked Matt what the biggest challenges were when undertaking the build. Unsurprisingly, height was the main answer. With a 4.5 metre ceiling, progress at times was slow and frustrating. Time also played a large factor. Balancing work, family life and the church build meant that progress could sometimes be slow. 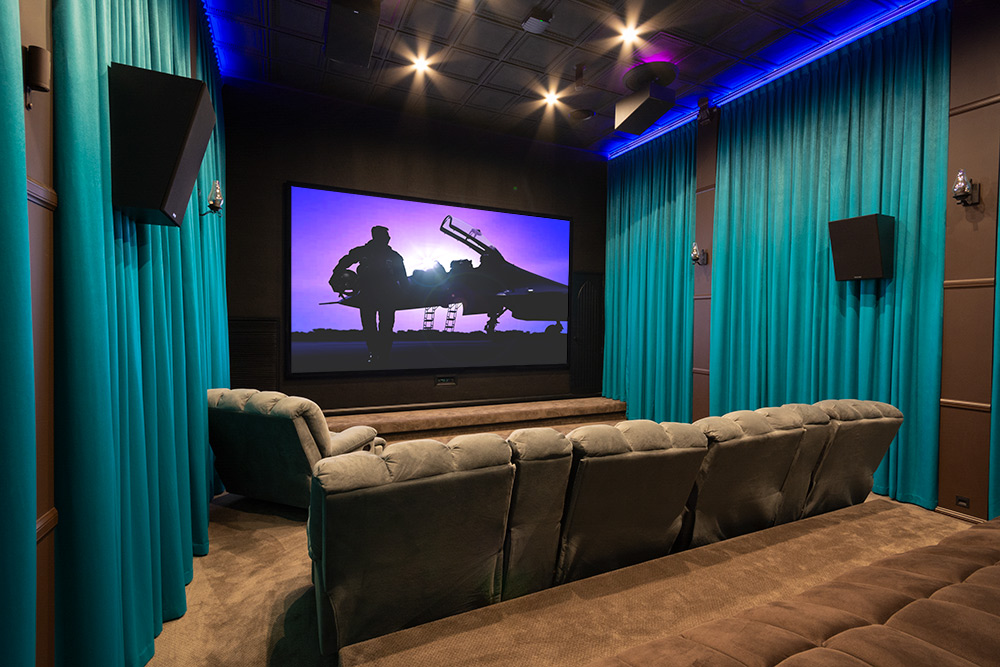 The cinema is used for movies, gaming, free to air TV and even internet browsing and Youtube videos. 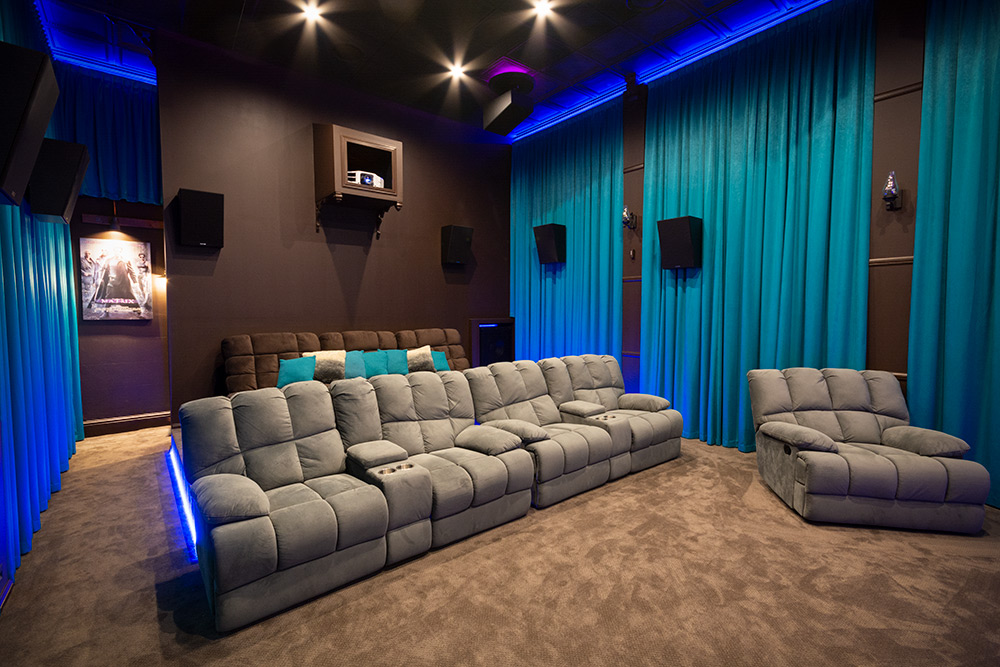 There’s seats for up to 11 people, the back row elevated with a riser.

Due to the length of the build, Matt was also concerned that some of the components his cinema was built around might be superseded or updated by the time the cinema was finished. Conversely, he was relying on affordable projector technology that didn’t exist at the time.

“I needed a 4K projector that had at least 5000 calibrated lumens of light output for an affordable price. At the time I designed the cinema this was not possible, so I had to take a leap of faith and hope that technology caught up with my design. Fortunately, it did – I ended up going for an Epson large venue projector that for its price is awesome. Calibrated 4K picture and brightness is stunning, blacks are good and price unbelievable. However I would still like a native 4K, HDR, laser light source projector at some stage in the future.” 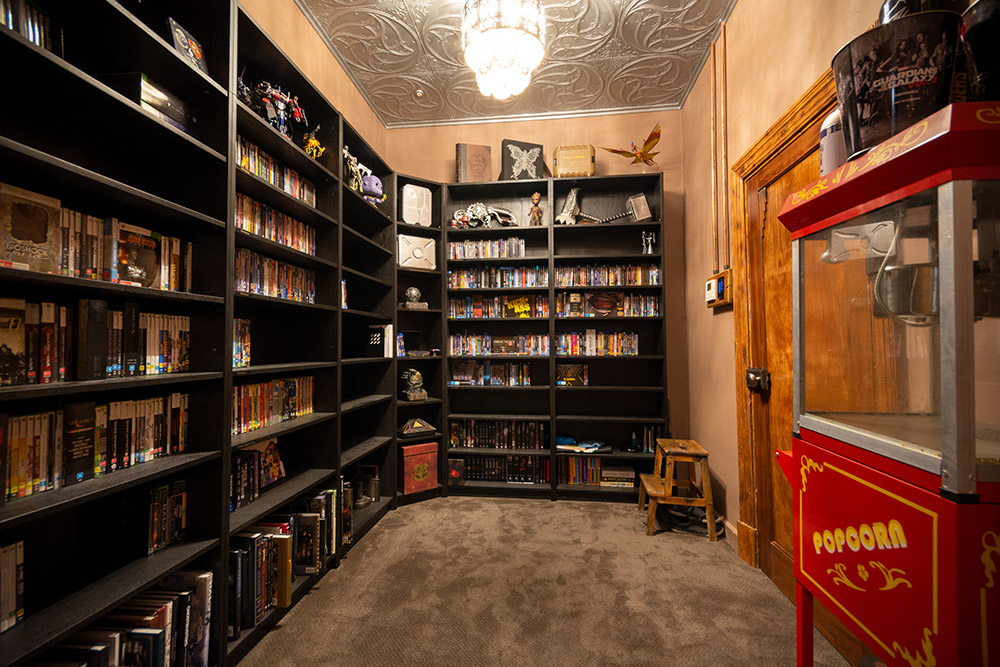 The foyer leading into the cinema houses all the source material and extra memorabilia. 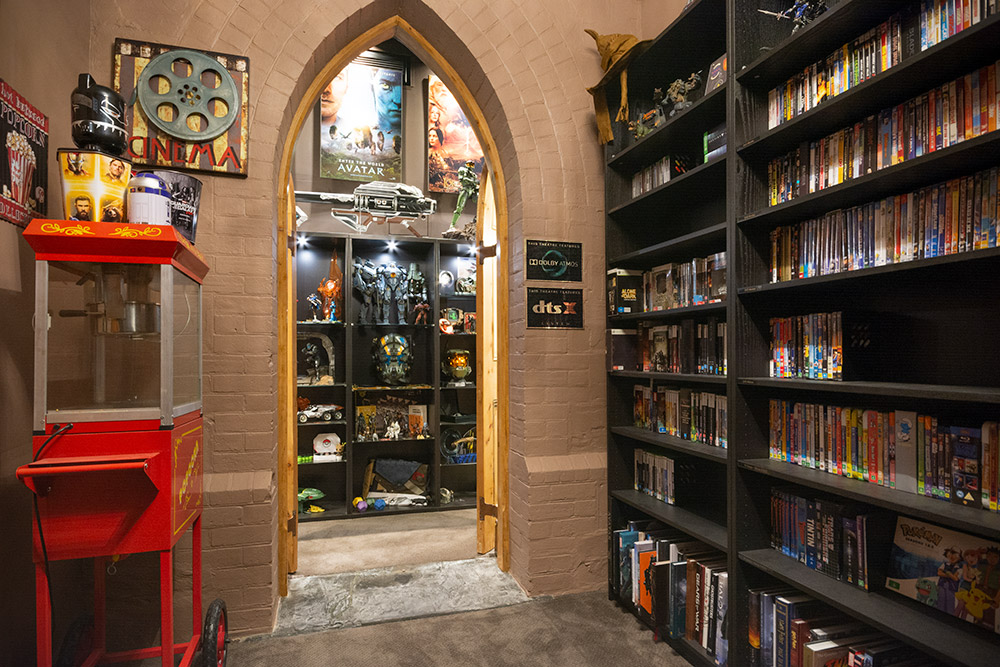 A vintage popcorn machine adds to the atmosphere – it gets used often! 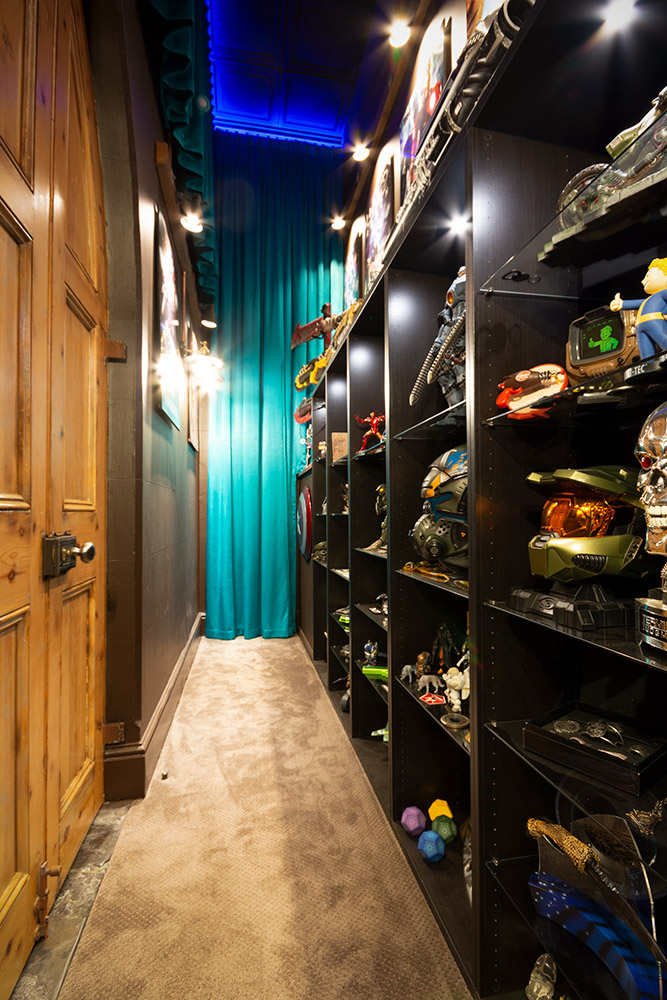 Movie and game memorabilia line the entryway. The Avengers, Halo and Gears of War fill a good portion of the collection.

You may be wondering what the neighbours think about the sound coming from the ‘church next door’. Fortunately for them, the walls are made of half-metre thick stone with 12mm glass in all windows. Every wall, ceiling and floor cavity is stuffed full of sound deadening material and insulation. So, while it looks like a church from the outside, passers-by are unaware of the formidable setup within.

As you might imagine, the complete setup has the potential to consume a lot of electricity. Wanting to offset the environmental impact, and sensing the pain of the forthcoming electricity bill, Matt had an 8kW solar system and battery hybrid system installed.

“The cinema draws 500W of power in standby mode and about 1.5kW when running. When the volume is turned up and the amps start sucking juice, this number goes up even higher.”

Lucky then, that Matt has around 5kW RMS of amplifier power at his disposal for when things really heat up! 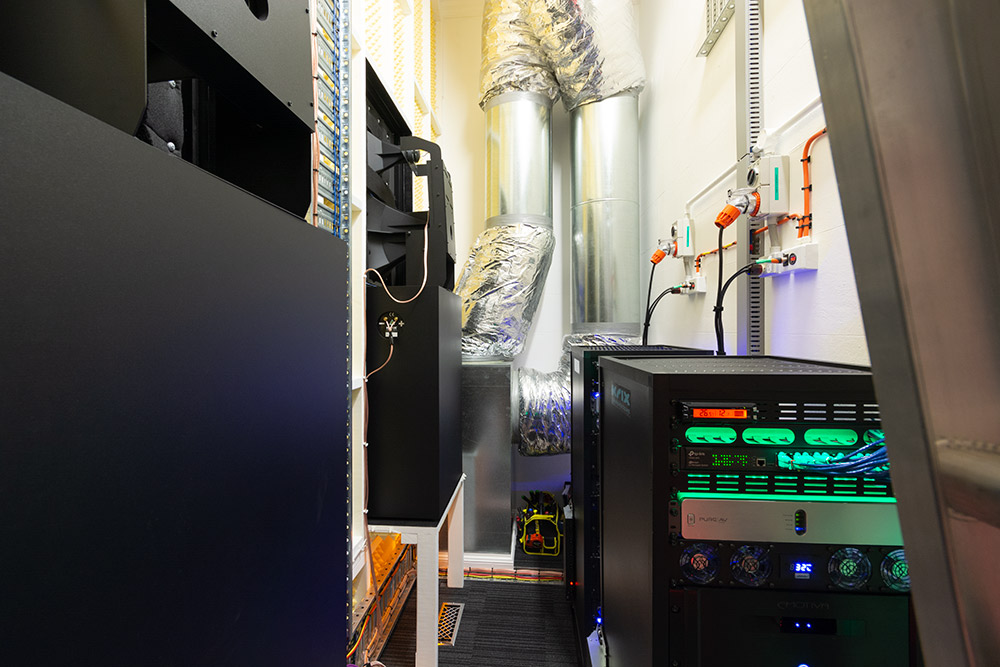 Behind the screen. You can see the backs of the Cinematix enclosures to the left. 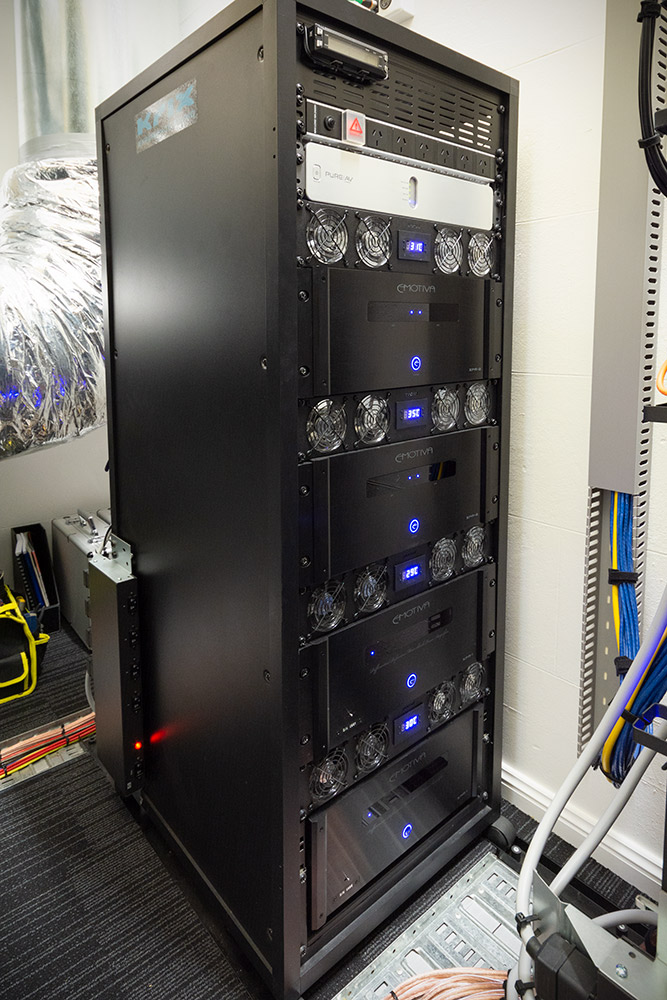 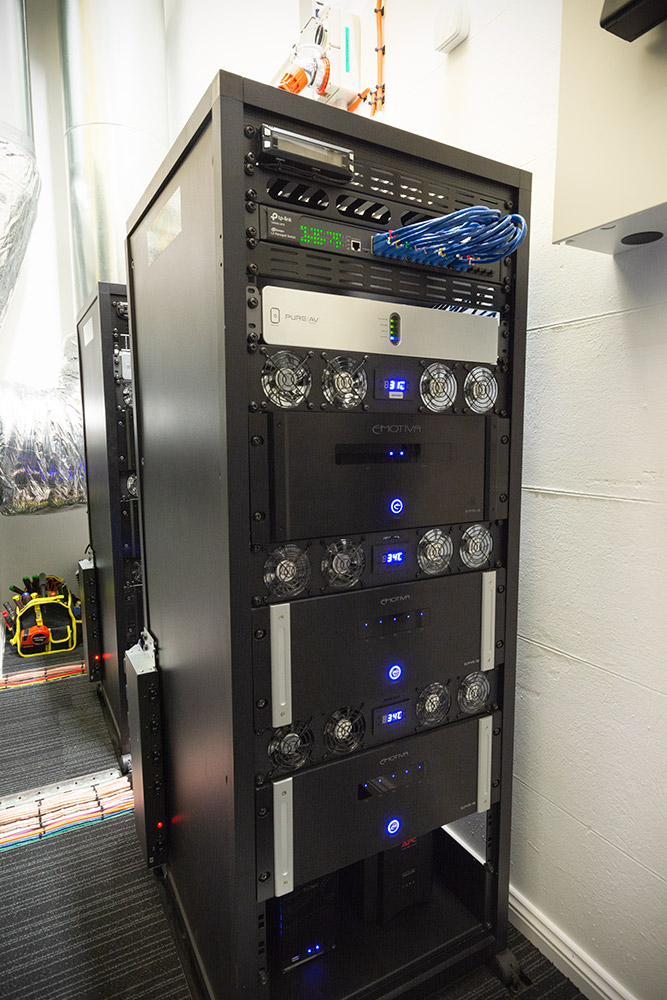 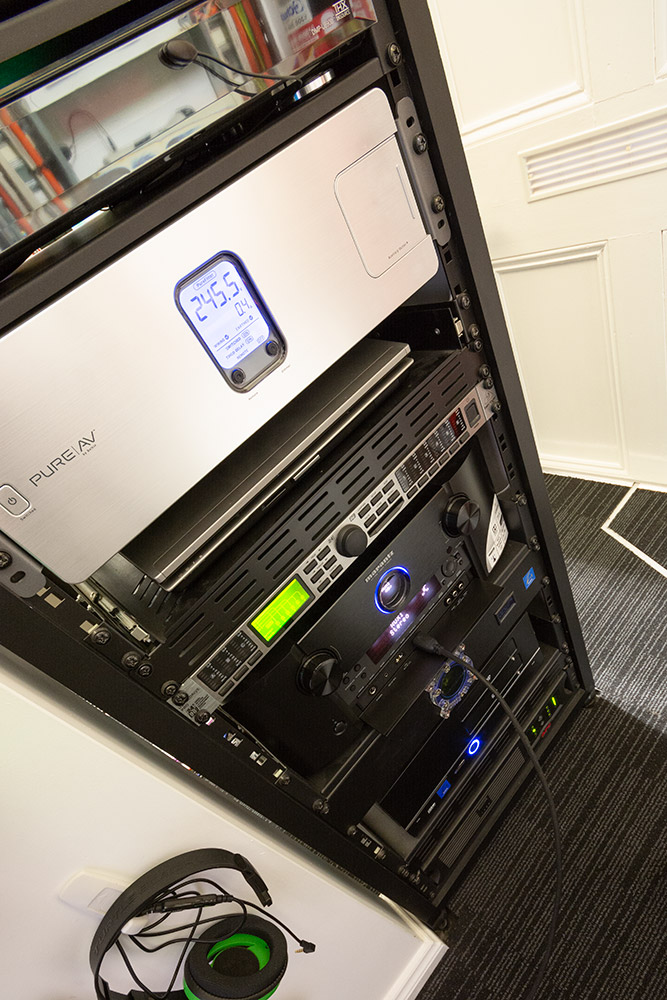 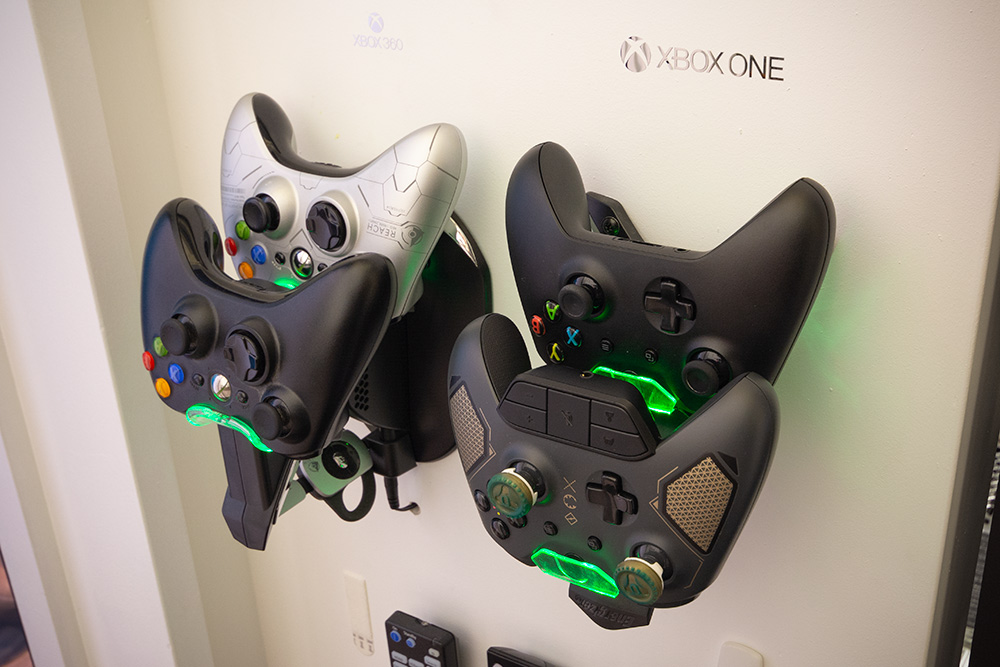 A custom charging rack for the Xbox controllers.

All up, the build took 3 years to complete. As he had hoped, Matt was able to complete almost all of the work by himself and in his own time. After looking through the foyer, cinema room and behind the screen, we were amazed at the level of care and detail. Not only in the technical aspects of the install, but also in the care taken in staying true to the original style of the church. Cathedral arch doors, architraves, styled wall sconces and corbel trim add charm and pay homage to the history of the building.

While we were there, we were lucky enough to be given a range of movie and Xbox demonstrations, starting with the first scene from Fate of the Furious and ending with the ever-entertaining sovereign fleet chase scene from Guardians of the Galaxy 2.

Matt’s plan had come to fruition. Every design choice and piece of equipment combined to provide a visceral experience that rivaled and even outperformed that of some of the best cinemas we have been to. When asked the best part about the build, Matt’s answer was simple; “Seeing my vision come to reality”. With years of time and effort culminating in a cinema experience of that level, we can wholeheartedly see why.